As the first company in the world, cosine has just received a scia Trim 300 Ion Beam Figuring (IBF) machine capable of automatically processing 300 mm wafers. The machine has been installed in cosine’s new development and production facility in Sassenheim, The Netherlands, which hosts more than 1.000 m2 of high-tech cleanroom area for supplying space and industrial customers. 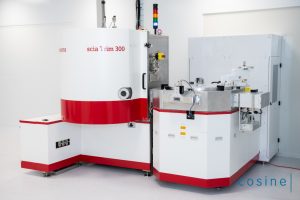 Ion beam figuring is a contactless high-vacuum process and a special type of ion beam etching. A focused broad beam of positive charged ions moves across the substrate surface and physically etches material by ion bombardment. With controlling the dwell time at a certain position, it is possible to precisely adjust the amount of material removal at each position of the substrate. This allows to correct thickness inhomogeneities and etch down to a uniform wafer thickness with an overall depth resolution in single digit nanometer range.

The introduction of IBF is part of a large effort of the European Space Agency (ESA) to prepare for its large class Athena X-ray observatory. This mission is the second ‘Large’ mission (L2) in the ESA Cosmic Vision program with the theme of the “Hot and Energetic Universe”. After continuous industrial studies and significant parallel technology development efforts in phase A the project entered phase B1 by mid-2020 after successfully passing the mission formulation review.

For the Athena project, cosine is developing and supplying hundreds of X-ray optics mirror modules, using cosine’s Silicon Pore Optics (SPO) technology. The SPOs are made from 300 mm silicon wafers, for which the high angular resolution specification of the Athena telescope requires a very small Total Thickness Variation (TTV) and a specific thickness gradient. cosine demonstrated to ESA that the accuracy and precision can be achieved with IBF. scia Systems, a German manufacturer for ion beam and plasma equipment, could meet the demanding requirements with its scia Trim 300 system. As Athena needs close to a hundred thousand of densely packed mirror plates, a high throughput machine for wafer processing was needed. The scia Trim 300 is equipped with a handling robot for cassette loading, which means that up to 50 wafers can be automatically processed one after the other, without user interaction.

cosine and ESA can now further boost the development of SPO using the IBF process, to enable exciting science for the world’s largest X-ray telescope Athena, as well as for other upcoming X-ray missions and X-ray optics applications for industrial customers.